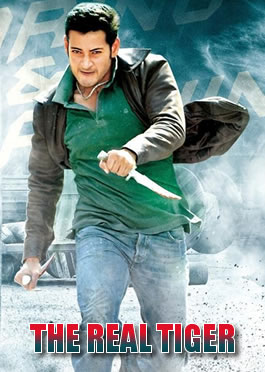 Ajay, (Mahesh Babu) an undercover cop, is assigned to catch a dangerous mafia don with whom he has a personal score to settle.

During the political realm of N. T. Rama Rao, Shankar Narayana is an independent MLA of the constituency of Shankar Nagar, which is named after him, in Hyderabad, and is regarded as a champion for the poor. When a truck collides with the car his brother Satyam and he is in, Shankar goes into a coma. Except for his family, everyone else presumes that he is killed in the accident. His son Ajay is a police officer in Mumbai who fights against the mafia and is on a mission to apprehend Mafia don Nayak who is involved in illegal drug trade, extortion and arms trafficking.

When he heads to Turkey in an undercover operation, he meets Prashanthi, daughter of Ajay's senior police officer and soon falls in love with her. She initially rejects his advances, so he pretends to give up. However, he is successful in the undercover operation and arrests Nayak's brother Bunty. After returning to India, he again meets Prashanthi. He tells her father to appreciate what she does and not be so strict. This, to his surprise, makes her reciprocates his feelings. In an attempt to arrest Nayak, Bunty and the police commissioner is killed and Shankar's loyal follower Sivayya reveals to Ajay that Nayak, along with Shankar's rival, Mallesh Goud and Shankar's other followers Meka Narsingh Rao, Ambarpet Ganesh, were behind Shankar's accident, which makes Ajay plot to kill all of them.

When Shankar comes out of the coma, the doctors who treated him advise his family that his life is at risk if he encounters or hears anything upsetting, disturbing, or shocking. Ajay hides the events surrounding the accident and shifts his family to his previously abandoned mansion which is now being used for film making. Ajay creates a dummy political set-up at this mansion. In the guise of a reality television program, Ajay tricks an aspiring but unsuccessful film actor Padmasri by making him believe that the television show is being sponsored by actor Akkineni Nagarjuna's television channel and that Nagarjuna wants to offer Padmasri very high remuneration for his realistic performance in the show. On the other hand, an aspiring actor Bokka Venkata Rao and Mallesh Goud are tricked by Ajay with a real estate business deal to exploit his criminal nexus.

Ajay keeps this drama under wraps from Shankar by making him believe that Ajay is also an MLA revered by people fulfilling his dad's wishes. He marries Prashanthi after gaining her family's consent much to Shankar's delight. Meanwhile, Ajay manages to kill Ganesh and Mallesh without the knowledge of anybody while Shankar believes that they died due to ailments. Nayak reaches Hyderabad to kill Ajay and Ajay's drama is exposed before everybody except Shankar. Meka Narsingh Rao is killed by Nayak while the latter's henchmen are killed by Ajay and others in an encounter. Nayak has later killed in a Ramlila event. Shankar too comes to know about Ajay's drama and is happy for the affection his son showed on him.