'The Night Manager' will release on February 17 on Disney+ Hotstar! 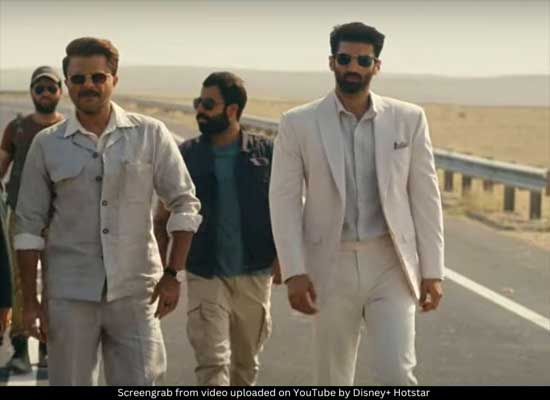 The official trailer for the Indian adaptation of 'The Night Manager' is out and it looks pretty intense. The series stars Anil Kapoor, Aditya Roy Kapur, Sobhita Dhulipala and Tillotama Shome in lead roles and it is based on the British spy series of the same name, which starred Tom Hiddleston, Hugh Laurie, Olivia Colman and Elizabeth Debicki.

The Indian adaptation will be releasing on Disney+ Hotstar on February 17. In the Indian version, Anil Kapoor (Shelly) will be seen playing Laurie's character who is an arms dealer. On the other hand, Aditya will play the titular character, a role which was originally played by Hiddleston.

In the trailer, we can see Aditya Roy Kapoor finding himself stranded in the middle of a snowy region. Anil Kapoor who plays Shelly in the series, then says that the Indian authorities can never catch him.

Tillotama Shome's character then orders Aditya (The Night Manager) to win the trust of Anil Kapoor (Shelly). From here on, the game of cat and mouse begins.

Earlier, while talking about the series, Anil Kapoor had said: "I have always loved working on differentiated content and characters. The first time I read the script, I just fell in love with the character of Shelly Rungta. Shelly is a powerful man, a philanthropist and a perfect balance of wit and evil with imperceptible menace just like the story of the show - a perfect blend of entertainment and great storytelling."

On the other hand, Aditya said: "I have always wanted to perform a multi-layered character in a series with a complex narrative arc, and when the platform approached me to play the title role in The Night Manager, I knew this was just the one I’d been looking for! My character Shaan is the kind of person who can effortlessly make people believe whatever he wants them to, and that perfectly mirrors what we as actors strive to achieve with our craft."