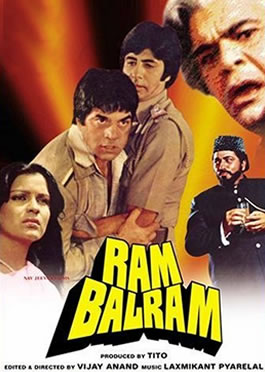 Ram and Balram are 2 young boys who live with their loving parents. Their scheming uncle, Jagatpal, however kills the boy's father and mother.

Ram and Balram are 2 young boys who live with their loving parents. Their scheming uncle, Jagatpal, however kills the boy's father and mother. Jagatpal lies to the boys that their parents have been killed in an accident and promises to raise them himself. He enrolls the younger brother Balram, in school and eventually sends him off to join the police force. The older becomes a mechanic. Jagatpal has a tight hold on the boys, even when Ram is an adult, he still gives all his wages to his uncle and is only allowed to keep a few rupees for pocket money. When Balram returns as a fully fledged police officer, Jagatpal finally reveals his plan. He is going to use Ram to target the biggest smugglers in India. Now that Balram is a police officer, he will protect his brother from getting arrested. Balram has reservations, but Jagatpal threatens to beat him just as he did when he was a boy. Balram is still unhappy with Jagatpal's plan so tells his superiors in the police force that his brother intends to infiltrate the smuggler's underworld so that Balram can arrest them. The plan goes well. Ram becomes one of the lieutenants of one of the biggest smugglers (Amjad Khan) and Balram's excellent arrest rate make him one of the force's most successful officers. Jagatpal becomes enormously wealthy from Ram's illicit gains. The brothers also find love. Balram with the daughter of a college professor (Rekha) and Ram with a girl who has moved to the area looking for her father (Zeenat Aman). Unbeknowst to Ram, the girl believes her father to be Jagatpal. She, along with her courtesan mother, attempt to extort money for Jagatpal but he refuses to believe he is the father. His suspicions are confirmed when he catches the mother paying off a former customer. The man is confronted by Jagatpal and confesses that the girl is not Jagatpal's daughter. Jagatpal's plan comes unstuck however when the boy's mother returns. She did not die after all. Ram recognizes his mother but Balram cannot as he was too young when they were separated. Both boys weep when they are reunited, Ram for the mother he has missed all those years and Balram for the opportunity he now has to get to know his mother. She reveals Jagatpal's actions to the two brothers and they unite to take him down.