Suhana Khan and Shanaya Kapoor pose for a stunning pic with Kendall Jenner! 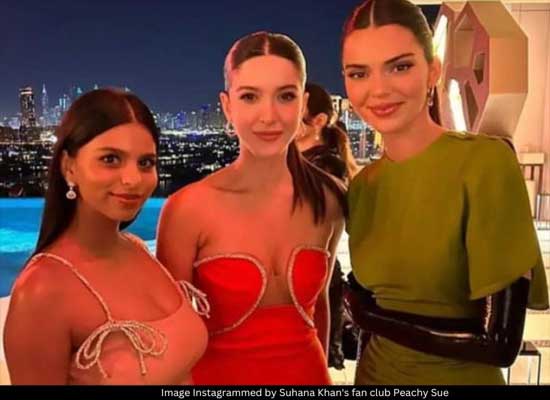 Suhana Khan and Shanaya Kapoor, who are set to make their Bollywood debuts in 2023, were among the many celebrities who attended the grand opening of Atlantis The Royal hotel in Palm Jumeirah, Dubai. The recent event saw many other A-listers in attendance including Kendall Jenner, Jay-Z, Liam Payne and Beyonce. Kendall Jenner also hosted an afterparty at the hotel’s Cloud 22 to celebrate the launch of her tequila brand, and Suhana and Shanaya were also part of it.

A stunning picture of the Bollywood beauties with Kendall Jenner is now breaking the internet.

In the photo, Suhana Khan, Shanaya Kapoor and Kendall Jenner can be seen posing for a glamorous picture with the backdrop of the cityscape and a swimming pool.

For the afterparty, Suhana Khan and Shanaya Kapoor opted for sizzling hot outfits. Shah Rukh Khan's daughter donned a Sol Angelann blush pink-hued strappy midi dress. She rounded off her look with a pair of diamond earrings, a statement ring, a handbag, and embellished strappy heels.

Shanaya Kapoor looked stunning in a red-coloured tube dress from the clothing label Self-Portrait. She paired her outfit with small hoops, sparkling silver handbag from Valentino and embellished silver stilettos.

For her makeup, Shanaya went for smoky eye shadow, nude lip shade, blushed cheeks and mascara on the lashes.

Several other photos from the party have been going viral on the internet.